Funerals In A Pandemic World
The current pandemic, which has shut us from much of what was ‘normal’ in our lives, has also been a boon to human resourcefulness. Children are continuing their education online with the guidance of their teachers, yet not present with them. Many of those who still have jobs are either working from home or go into the office less often while still many others have not stopped working, among them health care workers, though more so at the beginning of the Covid-19 virus invasion than now. Thankfully, at least so far, the pandemic has not packed the wallop originally predicted.

Sadly, the required safe-distancing has made other parts of life hard to bear particularly with family members with elderly relatives in retirement and nursing homes. These highly vulnerable people, actually to all manner of sickness, have been left isolated and often ignored as some were greatly understaffed and overwhelmed by the prospect of so much illness and already existing health conditions, made worse by the threat of Covid-19.
Personally, if my mother were still alive and living in the nursing home I would not have been able to just stay away leaving her to live like an innocent, vulnerable baby susceptible to neglect and virus, common flu or otherwise. I would have brought her to the rectory for as long as this cursed blight would last. I’m grateful that my mother passed when she did most especially for her sake and the promise of heaven she knew and believed in. For other families, however, that has not been the case.

During the pandemic, with churches closed and much of the sacramental life halted, it has been particularly difficult and even unbearable for many families who have lost a loved one to have the consolation of gathering as family and friends to grieve and fittingly mourn or to pray and have a funeral Mass. When we receive notices of the death of priests, some who have served for as long as 60 or 70 years, and to read that they will be privately buried with “a funeral at a later date” it makes the restrictions placed on our lives all the more real and painful. At one graveside funeral service I led, I helped to carry the casket of the 90-year-old woman who had died of Covid-19 from the funeral coach to the grave as there weren’t enough people present to do so, even with the two funeral directors who also served as pall-bearers. One wonders whether the cure for this virus has been or will prove to have been worse than the disease itself with high rates of suicides, a global economy all but shut down, people out of work and on and on the list of casualties goes.

Vince Corvinelli Dies At 86
One such casualty of the pandemic has been visible in the death of well-known, 86-year-old parishioner, Vincent Corvinelli, who, along with his wife Teresa had been instrumental in the construction of our new church. Vince, as everyone called him, had been in the construction business, particularly in the building of houses. for many decades and both he and Teresa managed the business and Vince, who had been raised on honest, hard labour, continued to be not only the boss but the labourer as well. Both Teresa and Vince had a love for the Catholic Church and the erection of a new parish church in Brooklin became an active passion for them as they helped in fundraising efforts and Vince became directly involved in the planning and progress of church building. The Corvinelli’s were also generous in their donations toward the pioneer work of building a church along with many other parishioners who stepped up and gave and/or helped to raise money for the construction to begin.

Vince had become weak over the last few years and officially retired from his work activity while still in his early 80’s, yet he never stopped working. When I visited Vince and Teresa in their home last December, I found Vince sitting at the dining room table drawing floor plans for new homes. Designing and building homes was his passion and love. Over the years I have learned of the high gratitude and praise people have had for the Corvinelli designed and built homes they had bought and lived in.

Vince died on Saturday, May 2 at home while waiting for coffee from Teresa and for the televised Mass from Rome to start. Teresa said he looked so tired and said he didn’t feel well. She called an ambulance to take him to the hospital but he never made it even into the ambulance, dying at home of a heart attack. And a good and kind and generous heart it was.

Funeral Restrictions Under Covid-19
With the reality of people being quarantined in their homes (a first in the history and meaning of the word quarantine) there could only be highly controlled visitation at the funeral home and, of course, no Funeral Mass. Over two days family and friends could visit the funeral home and quickly pay their respects with a limited number of people being allowed in the chapel at a time and social distancing being strictly observed while the family sat in a roped-off area a good distance from those who approached Vince’s casket.

On Thursday, May 7 I presided over the simple Funeral Service at the funeral home with only a handful of mourners allowed to be present, so strange when under normal circumstances both visitation and a Funeral Mass would have been well attended by the many who would wish to remember Vince, paying their respects, praying for Vince and celebrating the life, death and Resurrection of Jesus Christ in the Holy Sacrifice of the Mass, the world’s highest form of prayer. The overwhelming inability to properly and socially say goodbye was palpable and visible.

Yet, a beautiful thing was about to happen. We announced that since the small funeral procession was to go from the funeral home and past Vince and Teresa’s house (in the Italian tradition) and then onto Corvinelli Drive on the way to the cemetery, we asked the funeral home if they would first drive past the church doors of our closed church. We announced to parishioners watching the Livestreamed daily Masses from the church and reached out through Facebook to individuals to come to the church if they were able and observing safe-distancing practices silently be present to say farewell to a long-time parishioner and disciples of Jesus when there was no other way to fittingly do so.

A Beautiful Procession And Love Expressed
As we made our way from the funeral home and were headed north on Watford Street I could see from my vantage point in the lead-car that there appeared to be a number of cars at the church. As we turned into the front parking lot with the lead-car, the funeral coach with Vince’s body and small number of cars following I was moved and grateful of the many who stood by their cars or near the front sidewalk of the church in silence, some with flowers or signs which read “Eternal Rest, Vince” or “Thank you, Vince”. The lead-car and coach stopped briefly for a moment and not a word was spoken in our cars or by those who silently, respectfully stood. A couple in the parish brought a beautiful statue of Our Lady and placed it on a small table near the main church doors, mindful that Vince had a great love for the Blessed Mother and prayed the Rosary every day. We then moved on toward and past the Corvinelli’s house, built by them in the 1960’s and stopped briefly, with a small number of people who stood near their houses in this more rural setting. Finally, we made our way south, turning on to Corvinelli Drive, so appropriately named after Vince and Teresa and marking their considerable contribution and beneficence in the Brooklin community over the years. I couldn’t believe my eyes when I saw most of the houses on the street with their home owners and families out in front of their homes, some with signs expressing gratitude and commendation to Vince, others with flowers and the trees lining the street with red ribbons tied around them. As we slowly made our way down the street the number of people increased and I saw many of our parishioners in front of their Corvinelli-built homes, making the sign-of-the-cross as we passed. It was beautiful and took my breath away as I fought back tears of gratitude and disbelief. Finally we arrived at the cemetery where only a small number of immediate family were allowed into the mausoleum and even then our gathering and final prayers of commendation were brief.

The human spirit is mighty in what it can device in times of trouble and restriction. It was free, open and expressive in the respective silence I witnessed on the day of Vince’s burial and his commendation to the “home built not by human hands in the heavens”.

Farewell for a time, Vince. Return to Jesus, your true home forever. We will meet you and be with you again. 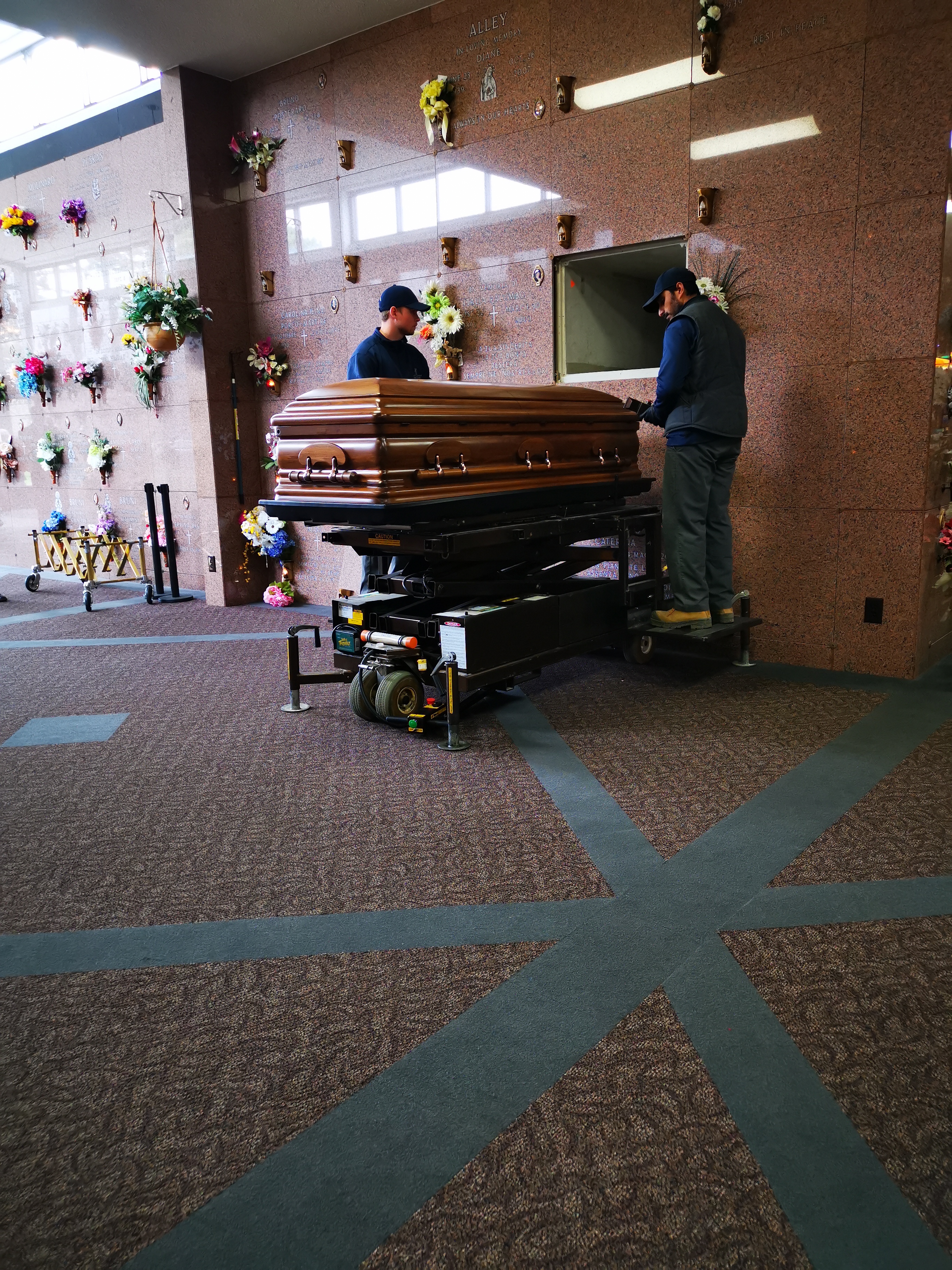